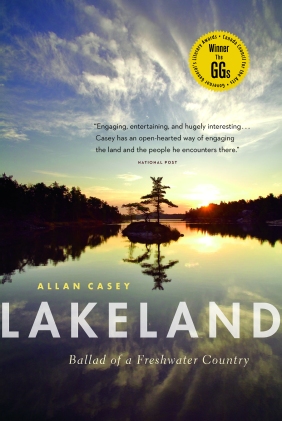 As interesting as an idea can be in and of itself, what’s also curiously exciting is the path taken by the mind from the initial zygote of that idea through its development phases and finally to its fruition.

I’m reading Allan Casey‘s ‘Lakeland‘, an exploration of and homage to some of the great lakes (no, not capitalized) of Canada’s vast geography. The writing is lyrical, the facts well-researched, the locations epic. Visiting the shores of Lake Athabasca in the middle of winter by driving an ice highway in -38°C weather? Definitely epic. I was curious, though, about the progression of the idea that pushed Casey’s story onto paper.

His explanation? The fact that (a) there aren’t any books about Canadian lakes, (b) they’re undergoing massive changes with rampant development, and (c) these changes are bringing us to a time in which “the proximate wilderness is a gated enclave, an upper tier, where standards of affluence and expectations for consumption are sky high. It is nature at a price….We risk raising the first generation of Canadian children to grow up without any particular attachment to wilderness because their families cannot afford membership” (p. 14).

While this is fascinating, it still represents fully formed ideas that are coherently set down in black and white type. I want to know what little zygote of an idea lodged itself in the back of his cranium and repeated itself endlessly, like an earworm does with a song. What led him to travel from northern Saskatchewan to Cape Breton and Newfoundland, to northern Ontario and down to a tiny national park in southwestern Alberta? What idea grabbed him by the nuts and told him this was a good thing to do?

The same can be asked of scientists. Right now the IceBridge mission is flying over Antarctica, mapping the ice sheets and subglacial topography. We know they’ll use the data to quantify changes in ice dynamics as a function of changes in ocean and atmospheric climate, while also trying to fathom basic ice dynamics on these massive ice sheets as a function of ice plasticity and flow and interactions with the underlying terrain. But where did this idea originate?

We can think of this on the scale of the individual person who first suggested that something would be a great idea and contribute X or Y to our array of science knowledge. But we can also consider the scale of an entire scientific discipline, or of a collective cultural knowledge, from its very beginnings to today.

Casey’s idea to write a lake book popped into his own head. Maybe some other peoples’ heads as well (like Jake MacDonald, quoted on the book’s back cover). But – as Casey acknowledges – lakes have always occupied box seats in the Canadian consciousness, a part of the vernacular that we use to describe our connection to ‘our home and native land’, whether it’s summers at the cottage or winters playing pond hockey. They are central to Canadian literature: his example is Margaret Atwood’s ‘Surfacing‘ (ironic, as I just read David Adams Richards’ ‘Facing the Hunter‘, in which he pillories that same Atwood book for its representation of hunters). Lakes are a place of exploration and danger – think of the adventurers who’ve traversed some of the Great Lakes, which have their own weather systems and other hazards. Thus behind that zygote of Casey’s idea is a humming mass of cultural references that could have – and likely did – contributed to planting that zygote.

Similarly, it was likely an individual scientist – or a group- who decided that the IceBridge program would be of value to the scientific community. But these scientists aren’t working in a vacuum. They’re building on a rich history of glacier research, stretching all the way back to Louis Agassiz’s 1840 publication of a two-volume work entitled ‘Études sur les Glaciers‘. Building blocks carved from seminal research papers paved the way to planting this idea in scientists’ minds.

What becomes tricky, then, is idea attribution. Particularly when a discipline or culture as a whole begins to flow towards the same new ideas. Hydrology has a number of buzzwords going around these days, including catchment classification; runoff generation; hydrologic connectivity; linkages between hydrology, landforms, and vegetation at various spatial scales; spatiotemporal heterogeneity in hydrologic processes…I’m sure I’ve missed some that are more cutting edge and included others that are becoming passé, but you get the drift.

Who came up with each of these original ideas? Was it the discipline as a collective? Are we all just mining our disciplinary unconscious for new ideas, tuned to its ebbs and flows like an RSS feed so that we can send ourselves subliminal e-alerts when key topics start coming up more frequently?

I had the strange experience last year of explaining to a colleague a really neat research idea I’d generated that grew out of a combination of my PhD student’s work (stream temperature) and my own expertise (snow hydrology). With a sabbatical coming up, I was eager to deploy some field gear and test the research hypothesis. Turns out he had a grad student who had just started work on exactly the same topic. In exactly the same environment in which I’d planned to test it. We move in the same circles. Read the same literature. Share ideas back and forth through our students. Who came up with the idea first? For a number of reasons – including respect for that PhD student and lack of time on sabbatical – I didn’t end up doing the work. But that conversation replays in my mind every now and then, and I’m curious about the path that led us to the same gameshow door at the same time.

Have you had an experience of coming up with the same great idea as someone else – at the same time? What did you do about it? Have you observed large-scale shifts in your discipline that correspond with everyone coming to similar conclusions of ‘what we need to study next’ at the same time?

One thought on “Unravelling the thread of an idea”