Last week I published an article in Nature.

Ha, I’ll bet you thought I meant a scientific article in the prestigious journal, Nature.

Nope. I published a Careers Q&A with Dr. Aerin Jacob, a conservation scientist with the Yellowstone to Yukon Initiative (Y2Y), based in Canmore. It came out in Nature Careers last Tuesday, and I’m just as pleased as I would be if I was still a scientist and publishing in Nature. 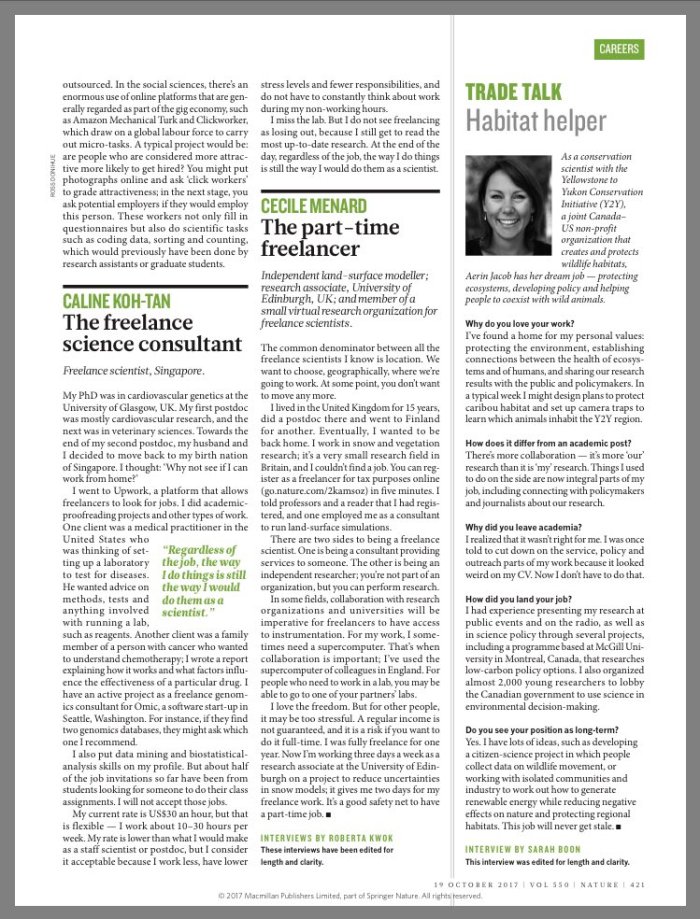 As you can see (above), it’s a relatively short piece that looks deceptively easy to write. But that’s definitely not the case.

Fitting a meaningful and understandable interview with a fascinating researcher into a 300-word box, which includes background on the researcher plus the questions themselves, is an art. I thought it might be helpful to share the process I went through, from initial draft to final copy. The published version is an entirely different—but much improved—article than what I originally submitted.

I started by putting together a list of questions I wanted to ask. To create these questions, I relied heavily on Jacob’s website, which outlines a lot of her past experiences (if you’re looking for an example of a comprehensive professional website, I recommend hers). I looked up the Y2Y site to get an idea of what they’re about (I also read Karsten Heuer’s Walking the Big Wild a few years ago, which was the beginning not only of Y2Y, but of my fascination with it), and to see what Jacob’s job as a conservation scientist entailed. I also drew on past conversations we’d had via Twitter and email.

My plan was to get a lot of good info by asking more questions than I needed to, and then narrow down my questions and focus in on specific responses to meet the word limit.

Then Jacob and I had a great Skype conversation—she was easy to talk to, and my questions elicited some great stories of her research career. Note that, not only did I ask the original questions I’d put together, but I asked more as the conversation unfolded, to get more information on specific events or to clarify certain aspects of her story.

After our chat I typed up my notes, then started moving pieces around to put together the interview. I shortened my original questions and selected responses from Jacob that addressed these. A few things were a bit unclear to me, so I contacted Jacob again by email for clarification.

Once I’d received her additional responses, I rejigged the article, selecting what I thought were key phrases that really captured what Jacob does at Y2Y. I ended up submitting a 375-word piece, imagining that we would whittle it down to 300 words during the editing process.

The editor, Karen Kaplan, didn’t respond as I’d expected. She said, “We’re way, way too abstract and vague.” She also said, “We use a lot of buzzwords and platitudes that don’t tell the reader much.” (It was nice of her to say “we,” when what she really meant was “you!”).

She said I had to really “drill down” and get “more granular.” So basically, be more specific while staying within the word limit. Which seemed oxymoronic.

I struggled. Wow, did I ever struggle. But Kaplan was supportive and helpful. She even gave me a bit of a way out when she said, “These can be a little tough when you’re new to them even though they look easy.”

Kaplan was clear: phrases like “science communication” and “soft skills” had to go. In their place, we needed concrete examples of what Jacob does, how, and why. To get more specific, I went back to Jacob via email with new questions that requested key information.

In my original draft, I’d asked her why this was her dream job. Her response was, “I primarily do applied ecology and conservation research, which I really enjoy. But I also get to do science communication, policy engagement, and community engagement.” There were those buzzwords, particularly in the last sentence. I went back and asked Jacob specifically what projects she’s working on and what she does in a typical day—which meant I also had to change the question to “Why do you love your work?”

I had to think hard about buzzwords like “science communication.” What wording could I use instead that would mean the same thing, but be easier for a general audience to understand? In the end, I settled on “sharing science with the public.”

One of my original questions asked whether the link between her personal and professional projects helped or hindered her job search. This question was problematic to begin with: it assumed that the reader knew that Jacob did research full time and worked on policy-related issues on the side. And it wasn’t phrased tightly enough to get at exactly what Jacob did that helped her get the Y2Y job. We ended up changing the question to “How did you land your job?,” which gave me the opportunity to note the significance of some of her extracurricular activities, like science storytelling, and galvanizing early career Canadian researchers to lobby the government for evidence-based environmental decision making.

Finally, I had asked Jacob if she saw this as a permanent job or a stepping stone to another job. Her response was “Definitely long term! The organization is fantastic, and there are research questions to be answered for years to come.” But you can see how vague this is. What makes the organization fantastic? What research questions does she have planned for the future? Again, I had to ask for specifics.

In the end, the interview went from six questions down to five, but those five were far more focused than my original six.

See how the final questions are short and to the point? And how they require tightly focused, specific answers that can be edited to avoid jargon and buzzwords?

As I noted in a previous blog post, even the word “biodiversity” was considered jargon, as these Career Q&A’s are read by researchers in a range of fields. We can’t expect a chemist or a physicist to know exactly what “biodiversity” means.

What’s fascinating to me is that, as a science editor, I’m a keen proponent of the plain language movement, and have taken a plain language workshop. I should have realized how obtuse the original draft of my article was. But it’s more difficult to edit your own text than it is to edit the text of others. I needed Kaplan to show me exactly how to fix my verbose and vague first draft.

The final Q&A is a model of plain language. For example, “In a typical week I might design plans to protect caribou habitat and set up camera traps to learn which animals inhabit the Y2Y region.” Everyone can read that and understand what it means. Unlike the original phrase, which was “I primarily do applied ecology and conservation research, which I really enjoy.”

I appreciated this opportunity to think hard about words, what they mean, and how readers interpret them. I learned a ton from working with Kaplan, and Jacob was a patient interviewee in dealing with my many additional questions. It was a good reminder that writing is a process, not just a product—which is easy to forget.

I’m proud of the final product, and feel like I’m up for the challenge of writing more of these articles!

For more behind-the-scenes stuff about science writing, check out The Open Notebook‘s pitch database, where you can see what successful pitches look like, as well as the articles they generate. For nonfiction writing advice in general, check out John McPhee’s latest (and greatest) book: Draft No. 4. This interview with McPhee is also worth reading.

14 thoughts on “Science Writing: Behind the Scenes”